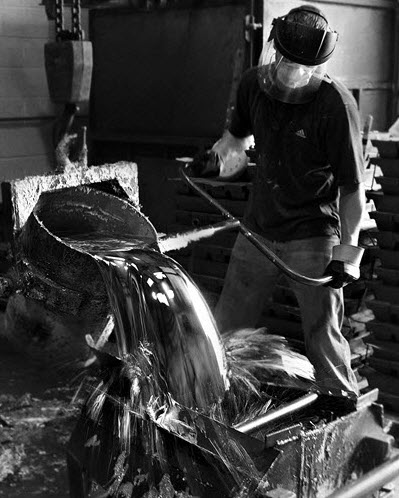 In 1988 two strangers got talking in a country pub. After several pints they emerged as partners in the Bulbeck Foundry.

Over three decades later the Foundry has developed a huge range of lead planters, statues and urns. Our style is firmly rooted in that golden age of English leadwork, the eighteenth century, though with our ability to cast using the lost wax process, almost anything can be commissioned and made. Every piece is designed, cast and finished by hand here at the Foundry.

Our leadwork can be found in the gardens of Sandringham, Balmoral, Clarence House, Hampton Court Palace, Chatsworth, Dumfries House, houses belonging to the National Trust and numerous other great houses, as well as Ralph Lauren's flagship store in Milan and Christian Dior's shop in New Bond Street. We have provided leadwork to colleges in Oxford and Cambridge, the Honourable Societies of Gray's Inn, the Inner Temple and Lincoln's Inn, the Charterhouse, Kilmainham Hospital in Dublin and Botanical Gardens in England and the United States as well as various local authorities and the Corporation of London (now called City of London).

We export all over the world and especially to the United States where our leadwork is proof against their severe winters.

The origins of the ornamental garden lie generally in the Italian Renaissance and particularly in Bramante’s design for the Cortile del Belvedere in the Vatican in 1503. His use of a grand central axis, of parterres on different levels linked by flights of stairs was imitated and developed all over Italy and then France, culminating in Le Notre's gardens at Vaux-le-Vicomte and Versailles.

The use of statuary, urns and fountains within these gardens was prodigious.

In England this fashion began in the late 1600s. But, whereas on the continent ornaments were made of marble or bronze, here we turned to lead, often painting them white to give the appearance of marble.

In the earliest period, the most important lead ornament makers were the van Nost cousins, both confusingly called John. John van Nost the elder became established in the 1680s with his most famous work at Melbourne Hall in Derbyshire and at Hampton Court.

On his death in 1710, his cousin John the younger inherited the business and supplied ornaments to many great houses including Stowe and Wrest Park.

The van Nost yard at Hyde Park was eventually taken over by John Cheere in 1737 and for the next 50 years he became the leading lead figure maker employing a large workforce. His work can be seen at Castle Hill, West Wycombe Park, Syon House, Blair Atholl, Stourhead, Castle Howard and numerous other grand English houses. One of his biggest commissions was for the Portuguese Royal Place of Queluz.

Other names of this period are Ardries Carpentiere (Andrew Carpenter), Edward Hurst and Thomas Manning.

But as suddenly as the fashion for ornamentation had arrived, so in the 1770s the fashion changed. Out went the parterres and man's iron mastery over nature; in came Capability Brown and his contrived natural landscapes. The demand for statues collapsed. By the time of Cheere's death in 1787 the manufacture of lead garden ornaments had virtually stopped. The golden age of English leadwork was over.